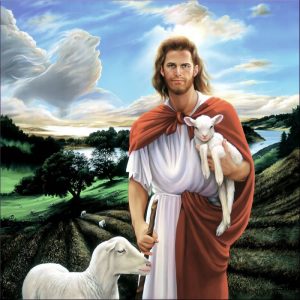 There is a spiritual dimension within each of my paintings, although it was not until the fall of 1991 that I ever considered the possibility of designating an exclusive spiritual purpose to any of my works. Essentially, I was a secular painter, well established with a successful profile in the contemporary art world. Through a series of serendipitous events, however, the direction of my life was changing, and as a result of powerful spiritual infusions and influences it was becoming necessary to confront a mandate from higher guidance.

I was being asked to paint a portrait of Jesus Christ. This was a most unlikely project for me, and my reasons for feeling that way were outlined with great logic. After careful deliberation of the issues connected with such a project, I made a counter-mandate: “If He shows up, I’ll be privileged to paint Him.” Such a calling — in dialogue with such an attitude — facilitated a profound evolution of character as well as invoking the presence of Sacred Phenomena.

On November 23, 1991 I sat quivering with frustration… like a wild horse in a box canyon, full of vigor and no place to go. All I could do was pray. I pleaded to be shown how to paint Him or else to have this commission taken from me. At that moment, a presence entered the room unlike any I’ve ever experienced. He stood at a distance from me in His own space. Although He was transparent, there was a radiant glow, and He displaced the air so conspicuously that I could see currents of pressure waves rippling about eight feet in front of me. Was it the Holy Spirit… or perhaps an angel? At that time, I had no reference points from which to discern, but later experiences and insights were to reveal that it was the Master, Himself, in pure spiritual form. The Presence called my name, though in no human words I know, and then shot a beam of energy from Himself to a point between my eyes. I presume He implanted something into my optic nerve, for a radiant picture projected before my eyes. It was the exact visual prototype of the painting to be done. Every detail was there, and it was available for reference from that moment until the painting’s completion. That was the source of the final image you see in the painting. No human subject was ever used.

As the days passed, our experience of being together was like that of friends. And His presence became increasingly real. The events of each day unfolded perfectly, as they should, and each hour of work was a living dialogue with the Master. We spoke of many things, large and small. The experience was both peaceful and dynamic, with every moment bringing a special fulfillment. The painting was finished on March 12, 1992, but the story of its miracles was just beginning. As prints of the painting spread around the world, letters and calls came in daily bringing stories of its blessing to the lives of others and the miracles that followed in its pathway. There is no order of importance in the realm of miracles. Nevertheless, an event of extraordinary scope and importance occurred on July 19th and 20th of 1992 which would highlight, with stellar brilliance, the miraculous nature of the Master’s portrayal.

The painting was being installed for exhibition on Sunday morning at St. Francis of Assisi Episcopal Church in Willow Park, Texas. Without warning, the main flood light fell and crashed into the painting. It hit on the left side, just between the divided trunk of the oak tree. Those of us who saw it happen screamed in terror and practically hit the floor in an effort to avert the damage. As I beheld the fallen painting, its damage glared at me. There was a four-inch dent with a one-inch incision in the center of it. There was a complete tear in the canvas through which I projected my little finger. I was so shaken it was difficult to continue with the program, although I persisted in honor of the greater purpose for being there. When the day was over, the painting was gently placed in its case and taken home. I couldn’t bear to look at it any further that night, so I went to sleep and postponed the final evaluation. The next morning I reluctantly removed the painting from its case. To my amazement, there was no cut! Then I looked at the back and observed that the canvas weave was as tight and perfect as the day it was stretched. The emotions I felt–from disbelief to exaltation–would fill a book! Only Father Hermann of the church was not surprised. He and others have now filed written testimony to the fact of the painting’s injury and subsequent healing. This is good! For to look at the painting today one would find no trace of damage remaining. Truly, July 20th was a joyous day of Divine revelation, that in the Master’s hands all things are made whole!